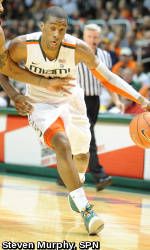 CORAL GABLES, Fla. – It’s the middle of January and the Atlantic Coast Conference standings have yet to take shape. Come Saturday night, things may clear up some.

The University of Miami men’s basketball team (11-5, 0-2 ACC) has an opportunity to put themselves right back into the midst of a muddled conference race when they play host to Boston College (13-4, 3-0) tonight at 6 p.m. the BankUnited Center.

The Eagles come in riding high, having won their first three conference games (at Maryland; vs. Georgia Tech; vs. NC State), while the `Canes will be in search of their first league win in their first ACC home game. The teams may be on opposite ends of the standings today, but a lot could change come 8 p.m. tonight.

In addition to the implications tonight’s game has on the ACC race, here are a few other storylines to follow when the `Canes and Eagles tip off tonight at the BUC….

Ready to GoSophomore center Reggie Johnson (6’10”, 303 pounds) appears to be ready to go for Saturday’s game after spending much of the past week wearing a walking boot following a bone spur injury that occurred during the team’s first practice after the Duke game on Jan.4.

“He’s fine now,” head coach Frank Haith said. “I think once Reggie felt confident from the MRIs – he’s got a little pain there – but I think once he got confirmation from the MRIs, he’s been better.”

When healthy and out of foul trouble, Johnson is one of the most effective big men not only in the ACC, but in the country. He currently ranks second in the conference in rebounding (9.7 pg) and 18th in scoring (12.3 pg).

“He’s going to have to play through [the pain] a little bit…. I keep telling him it will be less painful if he lost a little bit more weight,” Haith jokingly added.

“They are playing a different style, which they’ve adjusted to very well,” Haith said. “It’s almost like they have gone from a meat-grinder type of offense to an open court, pull-and-kick, shooting three’s.”

Four Eagles average in double figures, led by Reggie Jackson’s 19.5 points per contest, which is tied with Duke’s Nolan Smith for the conference lead.

“We’ve got our work cut out for us,” Haith added. “We’ve got to be on point and take away the three-point line. They have been very impressive, watching them on tape, in how they play.”

Garrius Will Be KeySophomore combo guard Garrius Adams is coming off one of his better games against Clemson on Jan. 8 when he sank a career-high four three-pointers en route to a 14-point outing against the Tigers.

“We challenged Garrius after the Duke game because I think we need more out of Garrius and I think he is capable,” Haith said. “Garrius obviously stepped his game up in that Clemson game but I think it is something we need consistently out of him because he can do a lot more.”

“I’ve talked to Malcolm and Durand and they feel real good when Garrius is on the court with them. It gives them another ball handler and it frees those guys up to score a little bit more too, which is good for our team.”

Adams, who leads the team with 18 steals, will likely be one of the key players called upon to defend the versatile Reggie Jackson on the perimeter.