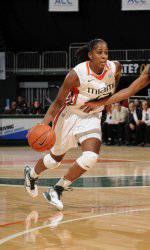 “Shenise is such a tremendous talent,” said Miami head coach Katie Meier. “However, her leadership and commitment to make her team better is what sets her apart. She has been a huge part of the resurgence of Miami women’s basketball and I consider her to be one of the best all-around players in the country.”

Johnson was among 30 players that were named to the Wooden Preseason Watch List and remained on the midseason list after 10 cuts were made.

Created in 1976, the John R. Wooden Award is the most prestigious individual honor in college basketball. It is bestowed upon the nation’s best player at an institution of higher education who has proven to his or her university that he or she is making progress toward graduation and maintaining a minimum cumulative 2.0 GPA. Previous winners include such notables as Larry Bird (’79), Michael Jordan (’84), Tim Duncan (’97), Blake Griffin (’09) and Maya Moore of Connecticut (’09). Ohio State’s Evan Turner and Connecticut’s Tina Charles won the Award in 2010.

The ACC had the highest number of players chosen, with four. Other conferences with multiple players represented include the Big East (3), Pac-10 (3), Big 12 (3), SEC (2), and Big 10 (2). The Atlantic 10, CAA, and West Coast Conferences each had one selection.

The 35th annual Wooden Award ceremony, which will include the announcement of the Men’s and Women’s Wooden Award winners, a special tribute to Coach Wooden and Wooden Award founder Duke Llewellyn, and the presentation of the Wooden Award All American Teams and the Legends of Coaching Award, given to Michigan State Head Coach Tom Izzo, will take place April 8, 2011.

In August, Johnson was named to the 2010-2011 preseason “Wade Watch” list for the State Farm Wade Trophy Division I Player of the Year.