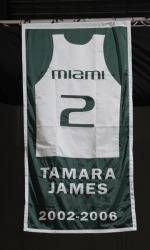 The honored jersey was just the third women’s jersey to hang from the rafters at the BankUnited Center – joining UM greats Maria Rivera (1984-88) and Frances Savage (1988-92).