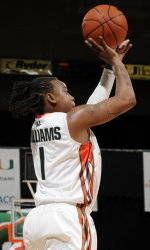 GREENSBORO, N.C. – University of Miami junior guard Riquna Williams earned this week’s Atlantic Coast Conference Women’s Basketball Player of the Week honor as announced by the conference office on Monday, the second time in three weeks she has earned the accolade.

The honor is the fourth in Williams’ career after winning the award on Dec. 13 and twice as a sophomore. The Pahokee, Fla. native scored a season-high tying 28 points on 10-of-16 shooting in Miami’s convincing 82-46 victory at Ole Miss on Dec. 21. In fact, the 36-point margin of victory was the largest ever in a game against a BCS Conference opponent on the road and the most in any game since an 80-43 win at home against St. John’s on Feb. 14, 2001.

Williams currently leads the ACC in scoring at 20.3 points per game and ranks sixth in steals (2.8) and seventh free throw percentage (79.7). In 12 games played, Williams has posted 20-plus scoring performances on six occasions.

Miami is 11-1 on the season, tied for the second-best start to a season after 12 games in program history. The Hurricanes will be hosting the Miami Holiday Classic Dec. 28-30 at the BankUnited Center.