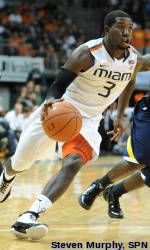 Get your Doubleheader Deal here!

Coral Gables, Fla.  – Malcolm Grant of the University of Miami men’s basketball team has been named the Atlantic Coast Conference Player of the Week after leading the Hurricanes to a perfect 3-0 mark in last week’s Las Vegas Holiday Hoops Classic.

Hailing from Brooklyn, N.Y., the junior posted a team-high 15 points – converting 3-of-5 from the field and 9-of-9 from the charity stripe – to lead Miami to a 69-56 win over Oral Roberts on Tuesday. In leading UM to the 73-67 win over Rice the next day, Grant registered his fourth 20-point game of the season, finishing with 25 points — just one point shy of his career-high, with a career-high tying six three-pointers for the second time this season. He converted 6-of-8 shots (.750) from long range and added a team-high tying three assists. Grant then helped UM close the Classic with a 69-61 win over Akron on Thursday with 17 points, highlighted by an 11-of-12 effort from the free throw line, and three assists.

Grant and UM returns to the hardwood on Thurs., Dec. 30, playing host to Pepperdine at 6 p.m. to open a Hurricanes doubleheader with the women’s team taking on Morgan State at 8 p.m. Tickets good for both games can be purchased for just $5 here. Miami then opens ACC play at No. 1 Duke on Jan. 2.