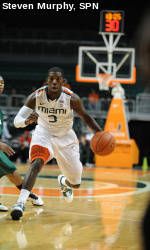 LAS VEGAS (AP) – Malcolm Grant scored 25 points, highlighted by six 3-pointers, to lead Miami over Rice 73-67 on Wednesday in the third round of the Las Vegas Holiday Hoops Classic.

Grant, who missed two shots from behind the arc, was 5 of 6 from the free throw line for the Hurricanes (9-3). He also was one point shy of a career high and had his streak of consecutive free throws stopped at 33 when he missed with 4:06 left in the game.

Sophomore forward Arsian Kazemi led the Owls (5-5) with a career-high 26 points. With his 14 rebounds, Kazemi had his seventh double-double this season. Lucas Kuipers added 12 points and Tamir Jackson 11.