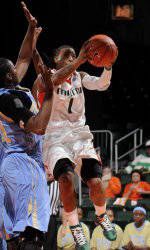 Williams currently leads the ACC in scoring at 20.5 points per game and ranks sixth in both steals (2.7) and free throw percentage (81.6). In 10 games played, Williams has posted 20-plus scoring performances on five occasions.

The Hurricanes are 9-1 on the season and will close out a nine-game homestand on Saturday when they face UC Riverside at the BankUnited Center at 5 p.m.