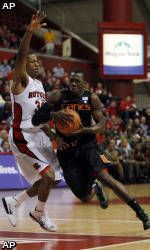 PISCATAWAY, N.J. (AP) – James Beatty scored 12 points and Dane Miller had all 11 of his points in the second half as Rutgers defeated Miami 61-45 on Sunday.

Austin Johnson had nine and Mike Coburn eight for the Scarlet Knights (2-1), who defeated the Hurricanes (2-2) for the third time in the last four games. It was the first meeting between the two since 2004, before Miami left the Big East for the ACC.

The Hurricanes, who were held to 36 points below their season average, got 12 points and 14 rebounds from Reggie Johnson.

The Hurricanes’ backcourt duo of Durand Scott and Malcolm Grant entered the game averaging a combined 30 points but were limited to eight.

Rutgers held Miami to 14-for-48 shooting (29 percent), forced 17 turnovers and had a 37-36 rebounding advantage. Mike Poole came off the bench for six points and six rebounds for Rutgers.

Coburn added six assists and four steals for Rutgers, which had 17 assists on 24 field goals.

Neither team could take control in the first half, when the biggest margin was four points for both sides. There were seven lead changes and four ties in the half, with Rutgers using a 5-0 spurt at the end for 24-20 edge. The Scarlet Knights would not trail again.

After having a 22-game regular-season winning streak against nonconference opponents snapped by Memphis Monday, the Hurricanes have lost two of their last three to nonconference foes.