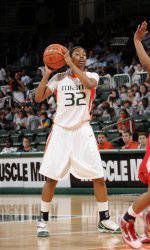 GAMEDAY
The University of Miami women’s basketball team plays host to its namesake Miami (OH) Saturday at noon at the BankUnited Center.

THE TEAMS
 The game on Saturday will be just the second meeting between the two Miamis, as the Hurricanes defeated the RedHawks 75-61 last season in Oxford, Ohio. In that game Shenise Johnson led the `Canes with a then career-best 29 points.
 The Hurricanes are one of 22 teams that received votes in the latest AP Poll.
 Even though it received huge scoring efforts from Riquna Williams (28) and Shenise Johnson (26), Miami fell to No. 21 Nebraska 99-85 on Wednesday.
 Like the Hurricanes, Miami (OH) doesn’t have any seniors on its roster. The RedHawks feature four juniors, two sophomores and six freshmen.
 Miami (OH) battled No. 9 Kentucky in its season opener in an 84-71 losing effort, but rebounded with a 76-59 win over EKU.

THE COACHES
 Katie Meier is 73-85 in her sixth season at Miami and is 149-130 overall. She signed a five-year contract extension in the offseason after leading the `Canes to the WNIT Championship game and a 2009-10 record of 22-14.
 Maria Fantanarosa returns for her 13th season as the head coach of the Miami (OH) women’s basketball program. Fantanarosa has posted a 187-171 record at the helm of the RedHawks.

IN-GAME CHAT
Fan can participate in a live in-game chat for tomorrow’s game by clicking on the CoverItLive graphic below 30 minutes prior to tip-off.

1,000 POINT CLUB
Late last season Shenise Johnson became the 20th player in Miami history to score 1,000 points in a career. She ended her sophomore campaign with 1,069 points. Two-games into this season, Johnson has 1,106 career points – currently ranking as the 15th most prolific scorer in school history.

FIFTH-ANNUAL YOUTH DAY
The University of Miami welcomed elementary and middle school children to be a `Cane for a Day at Youth Day at the `Canes home-opening win over Kennesaw State.

The School of Education, the President’s Office, Big Cheese and McDonald’s teamed up to provide a fun-filled day for local youth and to express the importance of education. Schools had the opportunity to showcase their cheerleaders or dance teams, as well as, nominate an Honorary Ball Kid that was recognized on court.

The future Hurricanes were treated to special halftime entertainment as Sebastian rounded up several of his friends and played a friendly game of hoops.

The service will be provided at a fee. To sign-up visit hurricanesports.cstv.com/allaccess/

THREE-POINT STREAK
With five threes against Nebraska, the Hurricanes have made at least one three-point field goal in 295 straight games dating back to the 2000-01 season – currently the 11th-best active streak in the nation.

DOUBLE-DOUBLE TROUBLE
The Hurricanes led the ACC with 22 double-doubles last season. After just one game they seem to picking up where they left off as Riquna Williams, Shenise Johnson and Morgan Stroman all recorded double-doubles against Kennesaw State. Virginia is the only other school in the conference with three double-doubles.