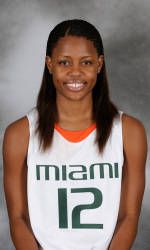 GAMEDAY
The University of Miami women’s basketball team tips off its season Friday at the BankUnited Center in Coral Gables, Fla. as the Hurricanes take on Kennesaw State. The game will be just a part of UM’s Fifth-Annual Youth Day.

FIFTH-ANNUAL YOUTH DAY
In its fifth year, the University of Miami is welcoming elementary and middle school children to be a `Cane for a Day at Youth Day.

The School of Education, the President’s Office, Chartwells and McDonald’s have teamed up to provide a fun-filled day for local youth and to express the importance of education. Schools have the opportunity to showcase their cheerleaders or dance teams, as well as, nominate an Honorary Ball Kid to be recognized on court.

These future Hurricanes will be treated to special halftime entertainment as Sebastian has rounded up several of his friends to partake in a friendly game of hoops.

TICKETS
• Season tickets are available for as low as $50. Tickets may be purchased online at HurricaneSports.com or by calling the UM Ticket Office at 1-800-GO-CANES.
• Single-game tickets are also available for $5 for all fans. UM students receive free admission when presenting their valid Cane Card.

THE TEAMS
• The game on Friday will be the first time Miami and Kennesaw State have met on the hard wood.
• The Hurricanes are one of 23 teams that received votes in the AP Poll and were chosen to finish eighth in the ACC Preseason Poll after finishing last season with a 22-14 record and an appearance in the WNIT Championship Game.
• In its only exhibition game, Miami defeated Rollins College in Winter Park, Fla. 95-62.
• Kennesaw State returns eight players from the 2009-10 squad that qualified for the Atlantic Sun Conference Championships in the program’s first year of eligibility since transitioning from Division II to Division I.
• The Owls finished their exhibition schedule with a 1-1 record, defeating Emmanuel 69-59 and falling to USC Aiken 79-61.

THE COACHES
• Katie Meier is 72-84 in her five seasons at Miami and is 148-129 overall as she enters her 10th season as a head coach. She signed a five-year contract extension in the offseason after leading the `Canes to the WNIT Championship game and a 2009-10 record of 22-14.
• Colby Tilley returns for his 16th season as the head coach of the Kennesaw State women’s basketball program. In his 15 previous seasons as the Lady Owls’ leader, Tilley has posted an impressive 267-169 record for a .612 winning percentage.

INSIDE THE PROGRAM
The 2010-11 women’s basketball season will be the first to offer multiple social media outlets for fans and loyal supporters of the program to keep current with the Hurricanes.
You can follow all University of Miami teams on Twitter by visiting twitter.com/hurricanesports or follow just women’s basketball at twitter.com/miamiwbb.

Fans can also check out HurricaneSports and University of Miami Women’s Basketball on facebook.com to get up-to-date news and information on the women’s basketball program.
HurricaneSports.com will also have all the most recent bio information and stats for all the team’s players.

IN-GAME CHAT
HurricaneSports.com will feature a live gameday chat for fans to follow at home or in the office. To participate in the in-game, please go to www.coveritlive.com. Live stats will also be available through Game Tracker.

1,000 POINT CLUB
Late last season Shenise Johnson became the 20th player in Miami history to score 1,000 points in a career. She ended her sophomore season with 1,069 point – currently ranking as the 16th most prolific scorer in school history.

The service will be provided at a fee. To sign-up visit hurricanesports.cstv.com/allaccess