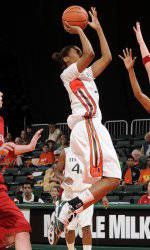 Meier Has the `Canes Thinking NCAA or Bust

CORAL GABLES, Fla. – Head women’s basketball coach Katie Meier spoke on a number of topics at the team’s media day Wednesday at the basketball Field House. Of course her star players – Shenise Johnson and Riquna Williams – were a big topic. So was the schedule, preseason rankings and offseason training.

Ultimately though, talk kept coming back to the NCAA Tournament.

Miami’s improvement under Meier the last few seasons have the coach, her staff, her players and the administration thinking big things for the program. The Hurricanes have increased their win totals by four two years ago to nine more last year when the `Canes went 22-14 in advancing to the WNIT finals.

That is isn’t good enough though, and Meier will be the first to tell you.

“I’m going to remind the team that we haven’t done anything,” Meier said Wednesday. “It was a nice run and it was great, but I don’t have a trophy in my office so we’re not going to rest on that. There is nothing in the locker room about it. That wasn’t what we wanted. It was good for what we had, but we have to take the next step here.”

That next step is the NCAA tournament, a place the `Canes haven’t been to since 2003-04.

“The NCAA tournament is a goal every year,” Meier said. “There is an equal ebb and flow from chances that we capitalized on and chances that we lost. I can’t as a coach say that if we won those close games we would have make the NCAA tournament. Yeah, we were a NCAA caliber team, but there are 64 teams that get in and then there are 50 other coaches that think that if they won that one game they would be in too.”

Meier, who signed a five-year extension over the summer, has finally had enough time to put all the pieces in place. Miami’s last three recruiting classes have ranked among the Top 25 nationally, including a No. 19 ranking for this year’s freshmen class. Her team boasts two former McDonald’s All-Americans in Johnson and Morgan Stroman, and this year will feature freshman Krystal Saunders, the reigning Florida Miss Basketball.

Her backcourt might be the best in the country, with the versatile Johnson playing alongside Williams, one of the most prolific scorers in the ACC. The frontcourt will center around Stroman, who Meier praised Wednesday at length for her development in the offseason.

But it will take more than those three. Now it’s about taking that success from late last season and turning into something better.

“Chemistry is going to be important,” Johnson said. “Those days were huge and we learned a lot about each other, but we are not young anymore. We are veterans. We are trying to make the NCAA this year and coach has done a great job of keeping us focused,” Johnson said.

Much of that focus has to do with not feeling complacent. It was clear Wednesday that Meier and her players have a sense of responsibility and determination that will show on the court.

“I think we can make it to the tournament,” Saunders said. “We are a much better team. I think we have a lot of depth and the chemistry this year will take us there.”

The chemistry may be the best it’s been in years, and while it is obvious that starts with Meier, it’s Johnson who appears to be embracing more of leadership role heading into her junior season.

“She’s an all-around player and her game speaks for itself,” Saunders said. “I believe that she will get her team more involved although she has to score. She is a team player. She talks to us and tells other players what they need to do and stays on us. She is a real good leader.”

Johnson, an All-ACC performer a season ago, can fill up the stat sheet. As a sophomore in 2009-10, she was the only ACC player to rank in the Top 10 in scoring, rebounding and assists. Her game on the court is clearly special. However, it’s her maturity that might be the difference this season.

“I just really want to be a vocal leader and make sure everyone is in the right places doing the right things and playing hard,” Johnson said.

If Johnson is able run with that leadership role and the team buys into Meier’s message, the NCAA tournament is a realistic goal.

“Until you put it on the paper and force the committee to not even debate you, you can’t rest,” Meier said. “We haven’t done that yet, so I haven’t rested.”