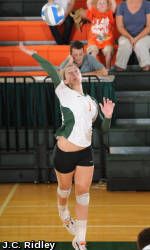 The Blue Devils took the opening set, 32-30, behind eight kills from Becci Burling and five from Sophia Dunworth. The `Canes served for set-point three times in the late stages of the opener behind the strength of six kills from Carico and five from junior outside hitter Christine Williamson. In the end, it was kills from Burling and Christiana Gray that sealed the win for the visiting Blue Devils.

UM took the second set in convincing fashion, 25-11, as Carico and freshman outside hitter Alexandria Johnson both tallied two service aces in the win.

UM tied the match at two sets apiece in the fourth frame, 25-22, forcing the fifth and deciding set.

The Blue Devils took control right from the start in the final set, using four kills from Dunworth and two timely kills from Amanda Robertson. Miami battled back to cut into the Blue Devils’ lead before falling in the end, 15-9.

Miami was led by Carico’s 21 kills, 15 digs and three service aces. Williamson added 17 kills and two digs. Johnson hit at a team-high .455 clip, finishing the night with 11 kills on 22 swings – adding 18 digs for her third double-double of the year. Setter Katie Gallagher amassed 39 assists, and sophomore Nrithya Sundararaman had 12 assists.

October is Breast Cancer Awareness month, and the University of Miami is also continuing its drive to support breast cancer awareness through the “Side-Out Foundation” before the `Canes take part in their “Dig Pink” match against Wake Forest. Prior to and during the match, the Hurricanes will wear pink warm-up T-shirts, as well as pink ribbons and other apparel during their match against the Demon Deacons.