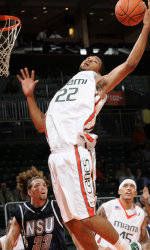 Getting to Know Donnavan Kirk

This 6-9 redshirt freshman forward is ready to show his skills on the court. A native of Pontiac, Mich., Donnavan Kirk graduated in 2009 from Detroit Country Day — which counts Chris Webber and Shane Battier among its alumni. Ranked among the top 30 power forwards by both ESPN and Scout as prep, he is expected to have a strong presence in the post for the Hurricanes.

Meet the humorous D. Kirk for yourself…

Getting to Know U — Donnavan Kirk

Favorite Cartoon when I was growing up: Dragon Ball Z

I’m a Hurricane because I like the University of Miami

At the U, I’ve learned so much from DeQuan Jones

If I was playing 2-on-2, I would choose Reggie Johnson for my team

If I could play any other sport at UM, it would be baseball

The best player I’ve matched up against is LeBron James

If I were a superhero, my name would be Xerce and my superpower would be power of mind control

I hate to admit it, but I love Jean Luc Ponty

If I were an animal, I’d be a lion

The farthest place from home I’ve been is Cabo, Mexico

If I could spend a day with anyone, it would be Bill Gates

The most influential person in my life is my mom

My worst habit is leaving shoes at the front door

If you walked into my dorm room, the first thing you would notice is trash everywhere

If I won the lottery, the first thing I would buy is a Maserati

One piece of advice for a new UM basketball player: Just stay focused and be patient

When I played basketball as a kid, I pretended to be Michael Jordan

My first job was mowing lawns

When I was little, I wanted to be a pro basketball player

Now my dream job is the same