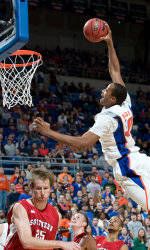 “We’re excited to have Kenny join our program,” said Coach Haith. “He is coming off a challenging year physically, but I’m confident that after sitting out this next season he will be able to contribute strongly to this program. Kenny is a talented player, has great size and will help us build a stronger paint presence in conjunction with our other players.”

The 6-10, 248-pound forward/center played in 42 games with Florida over the last two seasons, but saw his 2009-10 season cut short due to a back problems resulting in a medical hardship waiver from the NCAA. He will have three seasons of eligibility with the Hurricanes.

As a freshman with the Gators in 2008-09, Kadji averaged 4.4 points, 2.7 rebounds and 0.7 blocks in 12.5 minutes per game over 34 appearances. He scored in double figures four times, including a season-high 15 points versus UCF, and posted a season-high four blocked shots versus Vanderbilt.

Kadji was the fifth-ranked center in the class of 2008 by both Rivals.com and Scout.com and was rated in the top half of the ESPNU 100. He averaged 28.0 points, 12. 0 rebounds and 4.0 blocks per game at Pendleton/IMG Academy.

Kadji and fellow transfer Trey McKinney-Jones, a 6-5, 213-pound combo guard, will be eligible to play for the Hurricanes in 2011-12.