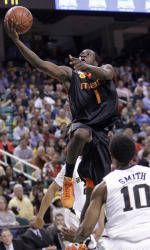 CORAL GABLES, FLA. – The University of Miami will take on UCF in the 2010 MetroPCS Orange Bowl Basketball Classic on Dec. 18 at the BankAtlantic Center in Sunrise, Fla.

The Hurricanes and Golden Knights will meet for the seventh time in program history in the annual doubleheader. Miami, who will be making its 16th appearance in the 17th annual Classic, leads the all-time series versus UCF, 6-0, including a 62-51 win over the Golden Knights in the last meeting between the programs on Dec. 27, 2002.

Game times will be announced at a later date.

Miami will also return more than 70 percent of its assists, three-point shooting and steals and 65 percent of its scoring to the hardwood under seventh-year head coach Frank Haith.

Tickets will be available through the Hurricane Ticket Office at 1-800-GO-CANES on a date to be announced.