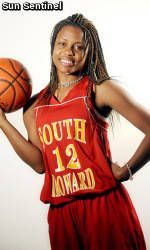 CORAL GABLES – Kystal Saunders, a member of the University of Miami women’s basketball incoming class, was named the 2010 Florida Dairy Farmers Miss Basketball for her performance during her senior season at South Broward High School.

Saunders, a 5-8 guard had a stellar season, guiding her team to 23-2 record and an appearance in the Class 6A Final Four. Described by Miami head coach Katie Meier as one of the most mentally tough players she has ever seen, Saunders led her team with 22.7 points, 7.0 rebounds and 5.1 assists per game this season. The prolific scorer hit 51 percent of her field goal attempts and shot 85 percent from the free throw line.

Earlier this year, Saunders was named the Sun-Sentinel’s Player of the Year and was a McDonald’s All-America Nominee. The high school star also comes from the same school as former Hurricanes Tamara and Lamese James.

“Obviously we already thought very highly of Krystal, even before her spectacular season,” said Meier. “She is a gritty, shoot-in-your-face type scorer with a tremendous basketball IQ. The fact that she is recognized as the best player in Florida is no surprise to us. However, we are incredibly thrilled for her and awfully proud to be adding her to our `Cane family.”

The winner of the 18th annual Miss Basketball Award, sponsored by Florida Dairy Farmers, Inc. and the Florida Athletic Coaches Association, was determined by a statewide panel of high school basketball coaches and prep media representatives.

The Hurricanes have never had a player on their team that has won this prestigious award. Past winners include Michelle Snow (Tennessee), Erlana Larkins (North Carolina) and Krystal Thomas (Duke).

Saunders is one of six incoming players that will join the Hurricanes this upcoming season. The class will join Shenise Johnson, Riquna Williams and the rest of the 2010 WNIT Finalist squad for the 2010-11 campaign.