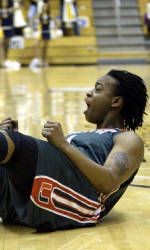 BERKELEY, Calif.  – The University of Miami women’s basketball team (22-14) advanced further in the postseason than ever in its history, but fell to the Cal Golden Bears (24-14) in the WNIT Championship game by a 73-61 score at Haas Pavilion.

Miami was never able to overcome a 12-point halftime deficit, only getting as close as eight points in the second half.

Sophomores Shenise Johnson and Riquna Williams provided most of the offense for the Hurricanes as Johnson scored 21 points and Williams added 20.

Johnson extended her double-figure scoring streak to 37 games and she added seven rebounds and five assists as well.

Williams hit two three pointers in the game, giving her a total of 106 for the season. That mark is just one shy of the ACC record, set by North Carolina’s Ivory Latta.

The Golden Bears’ post play proved to be too much for the `Canes, as DeNesha Stallworth scored 21 of Cal’s 48 points in the paint. Miami scored on 26 in the paint.

The Hurricane offense struggled in the first half, as it was unable to score for the first 5:47 of the game and trailed 9-0. Sparked by seven points apiece from Williams and Johnson, Miami then went on a 16-2 run and took a five point lead with 8:53 remaining.

However the shooting woes continued for the `Canes and Cal was able to close out the half with a 24-7 run, leading at the break 35-23.  Miami shot just 26.5 percent from the floor and missed all seven of its three-point attempts.

Williams and Johnson both were named to the Women’s National Invitational All-Tournament team.

With their 22-14 record, the Hurricanes had their most successful season under fifth-year head coach Katie Meier. Prior to this season, the Hurricanes had never won more than one postseason game. This postseason, Miami went 5-1 in the WNIT, in the first year that the tournament expanded to 64 teams.