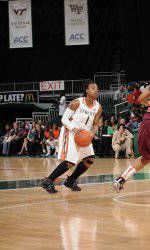 The Hurricanes held a four-point lead at the break and never trailed in the second period before ending the game with its biggest lead of 17 points.

However, her night nearly came to end as she came up lame after landing awkwardly on a layup attempt midway through the second half. Williams only missed four minutes of game time and came back into the game with an immediate statement.

Miami’s lead had dwindled to five at 56-51, but Williams hit her sixth and seventh threes of the night on two of Miami’s next three possessions, finally putting the game out of reach.

The seven threes on the night pushed Williams’ season total to 104, extending her school record and leaving her just three back of Ivory Latta’s (UNC) ACC single season record of 107.

Shenise Johnson hit three three-pointers of her own, on her way to 17 points. The First Team All-ACC selection also grabbed nine rebounds and dealt out a game-high seven assists while having her hand in on four steals.

Johnson is the only player in the ACC to score in double-figures in each game this season and now has scored in double-digits in 36 consecutive contests.

For only the second time in her career, senior Charmaine Clark recorded a double-double. She scored 10 points – all in the second half and grabbed 10 rebounds – one shy of her career-best.

Morgan Stroman scored eight points in the win and the freshman added nine rebounds. As a team, Miami out-rebounded the Wolverines 45-36.

The Hurricanes were down by as much as 11 points in the first half, but Williams helped erase that in 90 seconds, as she scored 12 straight points. The Pahokee, Fla. scored her first bucket on a full court pass from Charmaine Clark as she was fouled. After hitting the free throw to complete the three-point play, Williams hit three-pointers on three straight possessions. The last tying the game at 24.

Johnson also scored 12 first-half points, connecting on two three-pointers of her own and the `Canes led 37-33 at the break.

Michigan came into the game allowing only 46.8 points per game in the WNIT, but the Hurricanes had surpassed that mark, just 10 minutes into the second half.

Miami awaits the winner of the Cal-Illinois State semifinal, which will be played in Normal, Ill. Thursday night at 8:05 p.m. No matter the result, Miami will remain on the road to play in the championship game, Saturday, April 3. CBS College Sports will be televising the game live at 2 p.m. EST.