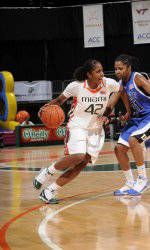 PROVIDENCE, R.I. – The University of Miami women’s basketball team (21-13) followed the lead of Shenise Johnson, as she played the best game of her two-year career in the Hurricanes’ 73-65 WNIT quarterfinal victory over the Providence College Friars (19-15), Sunday afternoon at Alumni Hall.

Johnson ended the game with a career-high 33 points and pulled down 10 rebounds for her 10th double-double of the season. The Henrietta, N.Y. native also was a perfect 4-of-4 from beyond the arc – another career-best.

With just 4:05 remaining, Providence pulled within two points at 60-58, but two Riquna Williams free throws and a Johnson three pointer on back-to-back possessions put the game away for the `Canes.

Williams, the second-leading scorer in the ACC this season, poured in 24 points, hitting four treys along the way. It was the 14th time this season that Williams scored 20 or more points on the year.

Miami was also clutch from the free throw line, hitting 14-of-16 in the second half and 21-of-27 for the game.

The Hurricanes held a 36-35 lead at the break and they opened the second-half on 14-0 run. The Miami defense was too much for the home team as the Friars were unable to score until 6:30 into the half.

Providence led by as much nine in the first half, but Williams and Johnson made sure that lead was short lived.

The duo carried the `Canes, scoring 31 of the team’s 36 points. The two All-ACC selections teamed up for 11-of-16 shooting, including all seven of Miami’s first-half three pointers.

Johnson hit her first seven shots, with three three-pointers, before finally missing on the last possession of the half. Williams missed her first two shots and quickly picked up two fouls and was sent to the bench early on. But after Charmaine Clark picked up her second foul, Katie Meier reinserted Williams back into the lineup.

The sophomore responded by hitting four three-pointers in a three-minute span and helped Miami take a 36-35 halftime lead.

Johnson came into the game just two points shy of 1,000 for her career, but only needed 18 seconds to reach it as she grabbed an offensive rebound and put it back for the game’s first points.

With the win, the Hurricanes will play Michigan in their first WNIT semifinal appearance. The Wolverines dismantled the Syracuse Orange in their quarterfinal game on Sunday, 78-52. Miami will travel to Ann Arbor, Mich. on Wednesday, March 31, with tip scheduled for 7 p.m.