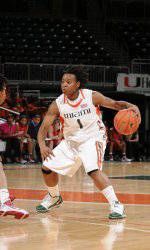 CORAL GABLES – The University of Miami women’s basketball team (20-13) used a huge first half and big defensive plays late, in its third round WNIT victory over the North Carolina A&T Aggies (23-11), Thursday night at the BankUnited Center by an 84-77 score.

With both team’s offenses pouring in points, it was a pair of back-to-back defensive plays from freshman Morgan Stroman that sealed the victory for the Hurricanes.

A four-time South Carolina State Champion in high school, Stroman stole an entry pass into the post and went coast-to-coast for the layup. She was fouled on the play and sank the free throw, pushing the Miami lead to 77-69 with 2:37 remaining.

The very next Aggie possession resulted in a Crystal Murdaugh jumper that was swatted away by Stroman. After collecting the rebound, she fired a full court pass to a streaking Charmaine Clark, who finished the easy layup.

The `Canes were able to milk the clock from that point on and sank 5-of-6 free throws in the final minutes, for the final score.

Riquna Williams led all scorers with 21 points, shooting 6-of10 from the field and 5-of-7 from three-point range.

Miami’s seniors have had huge games in each postseason contest and Thursday night was no different. Charmaine Clark scored 14 points, dished out a game-high seven assists and grabbed six rebounds. The Hinesville, Ga. native has scored in double-figures in each WNIT game.

Diane Barnes scored 10 points and was just two rebounds shy of collecting her eighth double-double of the season with eight rebounds.

Stroman had a game-high four steals and in addition to her defense, scored 12 points.

The Hurricanes offense exploded out of the gates, scoring 49 first half points. Williams, coming off the bench for the eighth-straight game, led the opening surge with 14 points at the break. The ACC’s second leading scorer, hit her first four shots of the game – all of them coming from beyond the three-point arc.

Overall, the `Canes were on fire from the field in the opening half, hitting 63.3 percent of their shots, including an exceptional 8-of-11 from beyond the arc.

Miami has reached 20 wins for the first time in six seasons, not since the 2003-04 squad advanced to the NCAA Tournament, ending with a 22-7 record. It is the second time that head coach Katie Meier has reached the 20-win mark, as she accomplished the feat when she was a fourth-year coach at Charlotte

With the win, Miami advances to the WNIT quarterfinals for the first time in program history and heads on the road to face the Providence Friars of the BIG EAST Conference. The quarterfinal matchup is set for 2 p.m., Sunday, March 28.