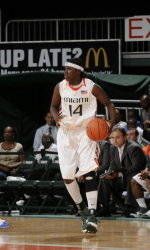 Hurricanes Blow by Florida into Third Round of WNIT

CORAL GABLES – The 2009-10 University of Miami women’s basketball team became the first team in program history to win consecutive postseason games, when it defeated the Florida Gators, 77-64, Sunday afternoon in the second round of the WNIT at the BankUnited Center.

The Hurricanes (19-13) trailed only once, when the score was 7-5 in the game’s opening minutes, on their way to a dominating performance against the Gators (14-17).

For the second straight game, sophomore Shenise Johnson led all scorers with 19 points. The First Team All-ACC performer also grabbed a game-high 10 rebounds for her ninth double-double of the season. The super sophomore was only two assists shy of a triple-double as she dished out a game-high eight.

Seniors Charmaine Clark and Diane Barnes continued their inspired play as they scored 16 and 13 points respectively. Clark’s scoring output was the most since she dropped 17 on Cal State Bakersfield in the second game of the season. Barnes added eight rebounds, two short of her eighth double-double.

Only able to play four minutes in the first half due to two quick fouls, Riquna Williams exploded in the second, scoring 12 of her 15 points. The Second Team All-ACC performer hit three three-pointers on the day, extending her school single-season record to 88.

The Gators had a size advantage over Miami, but the quicker and more athletic `Canes owned the boards – holding a 43-31 advantage on the glass. Fifteen of those rebounds came on the offensive end and led to 18 second chance points – Florida only scored nine points on put backs.

The Hurricanes held a 32-21 lead at the break and had their defense to thank for it. Katie Meier’s squad, pressured Florida into 13 first half turnovers and a lowly 29.2 shooting percentage.

Barnes had a huge first half as she led Miami with nine points and seven rebounds, picking up the scoring slack as Williams was riddled with early foul trouble. Johnson headed into the break already with four assists and pair of steals.

Azania Stewart led Florida with 18 points, while Steffi Sorensen added 15. Both women tied for the team lead with six rebounds. Lonnika Thompson led the Gators with seven assists, but was 0-9 from the field.

Sunday’s game was only the first meeting between the two teams since 2003 and was the second straight win for Miami over UF in the series – both wins coming at the BankUnited Center.

Miami’s 19 wins on the season is the most under Meier in her five year tenure and is the most for the program since the 2002-03 campaign, when UM went 22-7.

The Hurricanes now face North Carolina A&T of the Mid-Eastern Athletic Conference, Thursday, March 25 at the BankUnited Center, with tip-off set for 7 p.m. North Carolina A&T defeated UNC Charlotte, 79-70 on Sunday in Charlotte to advance to the third round..