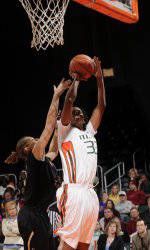 CORAL GABLES – In its first postseason game since the 2005-06 season, the University of Miami women’s basketball team (18-13) defeated the Florida Gulf Coast Eagles (24-7), 70-57 in the first round of the WNIT, Thursday night at the BankUnited Center.

Miami, with no postseason experience on its roster, fell behind by as much as 11 points in the first half and trailed 35-27 at the break. However, the young Hurricanes struck back in the second half – scoring 13 straight points. In all, the `Canes went on a 34-10 run and never looked back after reaching a game-high 15 point lead at 58-43.

Shenise Johnson scored 20 points for the Hurricanes – the 13th time this season that the First Team All-ACC sophomore has scored 20 or more points. She also added six rebounds and dished out a game-best seven assists.

Morgan Stroman and Charmaine Clark each added 13 points for the `Canes with Clark adding five rebounds. Clark’s fellow senior, Diane Barnes, grabbed a game-high 11 rebounds and had a pair of blocks in helping Miami advance to the second round.

The Eagles came into the game hitting 10.3 three-pointers per game and they lived up to that number, hitting six in the first half alone. However, the Hurricanes pressure defense held Florida Gulf Coast to only one three in the second half.

That Miami defense also held the visitors to a 37.3 shooting percentage and forced 21 turnovers, leading to 27 points. FGCU only managed 10 points off of 15 UM turnovers. The Hurricanes held a 39-29 advantage on the boards and owned the paint, outscoring their opponent 32-20.

Florida Gulf Coast shot 48.1 percent from the field in the opening half, helping to build a 35-24 lead. A Sylvia Bullock layup and a Barnes free throw closed the half time gap to eight points and gave the `Canes some momentum heading into the break.

The Hurricanes will remain home for their second round matchup when they host Florida at the BankUnited Center, with tip-off set for 2 p.m. on Sunday, March 21.

Tickets are on sale, with general admission selling for $5 and courtside seats selling for only $15. Please visit Hurricanesports.com or call 1-800-GO-CANES for more ticket information.