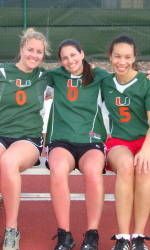 Held on the first Saturday in March, the Jenna Johnson Alumni Game featured three 30-minute periods of action – pitting the alumni against the current roster. The alums then joined the current team for a post game meal at Monty’s after the game. In all, 14 alumni from all over the country returned for the festivities.

“I enjoyed having the alumni back on campus and getting the opportunity to re-connect with them,” said head coach Tricia Taliaferro. “I am so proud of the success they have created for themselves and they represent the University and soccer program with such character and pride. I look forward to next year already!”

Jenna Johnson played for the Hurricanes from 2001-2003. In December of 2005, Johnson passed away of heart failure while training for the Los Angeles AIDS Marathon. The alumni game was named in her memory beginning with the 2008 contest. In 2004 she was named a Rhodes Scholar Finalist. For more information on Jenna and her foundation please visit www.jennajohnson.org