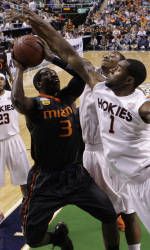 | How to watch Miami-Duke on Saturday

GREENSBORO, N.C. (AP) – Durand Scott scored 11 of his 17 points in the final six minutes and 12th-seeded Miami continued a stunning run in the Atlantic Coast Conference tournament with a 70-65 victory over Virginia Tech on Friday.

DeQuan Jones added 14 points for the Hurricanes (20-12), who have knocked out a pair of higher seeds to advance to Saturday’s semifinals against top-seed and No. 4 Duke at 1:30 p.m.

Jeff Allen scored 18 points for fourth-seeded Virginia Tech, which couldn’t overcome a miserable performance by ACC leading scorer Malcolm Delaney. He was held to seven points on 3 of 15 shooting, including 0 of 8 from 3-point range.

Delaney missed two shots on the same possession with under a minute left and Virginia Tech (23-8) trailing by one. Scott hit two free throws at the other end, and Terrell Bell missed a tying 3-point attempt to end the Hokies’ hopes.