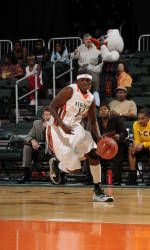 CORAL GABLES – The University of Miami women’s basketball team will play host to the Boston College Eagles in the regular season finale on Senior Day this Sunday, February 28 at 2 p.m.

The Hurricanes are looking to end the regular season on a high note after dropping their last five games. Both Charmaine Clark and Diane Barnes will be playing in their final home game and both women will be honored in a pregame ceremony on Senior Day.

In their last game, the ‘Canes fell to the ninth-ranked Seminoles in Tallahassee, 87-62. Florida State shot 50 percent from the field in handing Miami its biggest defeat of the season. In the loss, Riquna Williams scored a team-high 22 points in coming off the bench. Stefanie Yderstrom scored 16 points, the most in an ACC game for this season and Shenise Johnson also scored 11 – keeping her double-digit scoring streak alive, now at 29 games.

A Look at the Eagles

Boston College heads into Sunday’s season-finale having defeated Maryland, 83-70. However, prior to that win it had lost three straight to Wake Forest, NC State and Virginia Tech.

The Eagles are led by Carolyn Swords who is averaging 14.2 points and 9.4 rebounds per game. Mickel Picco and Stefanie Murphy score 12.1 and 11.2 points per game apiece. Jaclyn Thoman leads the team with 104 assists on the season.

The Hurricanes own a 17-16 all-time series edge over Boston College, but the Eagles have won the last seven meetings. Earlier this season, Miami traveled to Chestnut Hill, Mass. and fell 72-64. In that game, Barnes led Miami with 15 points, while Johnson scored 14 and Williams added 11.