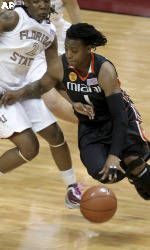 Riquna Williams was explosive off the bench for the Hurricanes, scoring a team-high 22 points – hitting four three-pointers along the way. At one point in the first half, Williams scored 11 straight points for the ‘Canes.

Freshman Stefanie Yderstrom added 16 points for Miami – hitting four treys of her own. The output was the most for the Swedish import in an ACC game this season.

The Hurricanes do-everything guard, Shenise Johnson was limited to 11 points, but she also led Miami with seven rebounds, six assists and three steals.

Despite their best efforts the ‘Canes were unable to catch up with the hot shooting Seminoles. Jacinta Monroe scored a game-high 23 points and her teammates, Alysha Harvin and Courtney Ward hit five and four three-pointers respectively for 18 points apiece.

As a team, Florida State shot 50 percent from the field and out-gunned Miami at the foul line – hitting 20-of-26, while the Hurricanes were only 5-of-7.

The Hurricanes led by as much as 12 points in the first half, but trailed 41-37 at the break after a near six-minute scoreless stretch allowed the Seminole to claw back into the game and take the lead.

Williams, coming off the bench, scored 17 first-half points. At one point she scored on three consecutive three pointers in under a minute. Yderstrom hit a pair of threes and had 10 points at the break

Florida State’s Ward nearly matched Williams’ opening period as she poured in 15 points of her own. Monroe added 11 points for the ‘Noles.

Miami returns to the BankUnited Center on Sunday, Feb. 28, when it faces Boston College in the regular season finale. Seniors Charmaine Clark and Diane Barnes will be honored in a pregame Senior Day ceremony, with tip-off at 2 p.m.