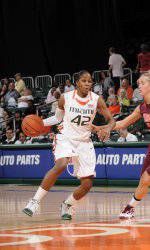 Miami Falls to Clemson on Last Second Shot in Overtime

CLEMSON, S.C. – The University of Miami women’s basketball team (16-10, 3-8) suffered a last-second defeat at the hands of the Clemson Tigers (12-16, 3-9) when an acrobatic Lele Hardy layup with 0.8 seconds left in overtime gave the home team a 73-72 win at Littlejohn Coliseum Thursday night.

The score was tied on six different occasions and the lead changed hands a remarkable 17 times in the back-and-forth affair.

Clemson’s hardy was 1-of-15 before she hit the layup that sent the game into extra-time, then hit the game-winner in the overtime period. The senior ended the game with 12 points and nine rebounds.

Spoiled were the efforts of several Hurricane players, including Shenise Johnson, who again carried Miami with a game-high 22 points. The scoring effort was the third straight 20-point output for the ACC’s third-leading scorer. Johnson also handed out four assists to go with two blocks and two steals.

Riquna Williams, who came off the bench for the first time this season, hit three crucial three-point baskets in the second-half and overtime, seemingly putting the `Canes out of reach in both periods.

With 1:03 remaining in regulation, Williams hit her first three to put Miami up 60-55. However, on the next Clemson possession, Sthefany Thomas made a three of her own. After holding the `Canes, Hardy’s layup with 3.8 seconds left sent the game into overtime.

Williams again hit a three-pointer for Miami with 48 seconds to go in overtime – extending the UM lead to four. But Thomas again responded – with her fourth three-pointer of the night, prior to Hardy’s game-ending bucket. Thomas scored 18 for the Tigers.

Diane Barnes was the Hurricanes rebounding leader – grabbing 11, she also scored 10 points for her seventh double-double of the season and first in conference play.

Morgan Stroman added 10 points and four rebounds for Miami, while Stefanie Yderstrom hit three treys on her way to 11 points. Williams ended the night with 17 points.

The `Canes forced 23 Clemson turnovers – giving Miami a 27-17 edge in points off turnovers, but Clemson grabbed 19 offensive rebounds and had 13 second-chance points, compared to only three for UM.

Shaniqua Pauldo scored 14 of her 17 points in the opening half for the Tigers, while the Hurricanes were balanced as Johnson, Williams, Barnes and Yderstrom each had six points at the break.

Miami falls to 0-3 in overtime games this season and the Clemson win at home was the first home win for either team in their eight-game all-time series.

Miami returns to the BankUnited Center on Sunday, Feb. 21, when it faces its rival No. 19 Georgia Tech at 3 p.m. The contest will be regionally televised on CSS.