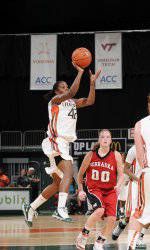 CORAL GABLES – For the second-straight season, regulation wasn’t enough for the University of Miami women’s basketball team against a tough Virginia squad, as the Hurricanes fell 69-63 at the BankUnited Center, Thursday night to the 21st-ranked Cavaliers.

The matchup featured the Atlantic Coast Conference’s top three scorers and none of them disappointed. Shenise Johnson made her case for the ACC Player of the Year as she recorded her second straight double-double in conference play, scoring 22 points and grabbing a game-high 11 rebounds.

Virginia (18-6, 7-3) led the entire first half, but Miami closed the first half and opened the second on a 14-1 run and took its first lead on Johnson three-pointer to open the second period at 30-29. After that, a Williams’ three and a Diane Barnes layup gave the Hurricanes their biggest lead of the game at six points.

The Cavaliers were able to tie the game at 45 with nine minutes left in regulation – aided mostly by offensive rebounds and second chance points. In all, the visitors missed 44 shots, but were able to rebound 21 of those misses – leading to 18 points. The Hurricanes only scored four points off their 12 offensive boards.

The lead changed four times in the final minutes of regulation, with UVA’s Wright tying the game at 52 with 1:54 to go, then hitting another jumper for the lead with 32 seconds remaining.

Johnson responded for Miami, driving along the right baseline and pulling up with the game-tying jumper with nine seconds left. Wright wasn’t able to convert Virginia’s last possession of regulation, forcing the `Canes second overtime game of the season.

Just like in its loss to Georgia Tech in January, overtime wasn’t kind to Miami, as it fell behind by seven points before Charmaine Clark connected on a layup, 3:22 into extra time.

Johnson added a game-best five steals on the night, but also committed six of Miami’s 21 turnovers.

The Cavaliers jumped to a 10-2 lead to open the game, but Miami forced 10 turnovers to get back into the game, pulling to within one on several occasions. The halftime score was 29-27 and Williams and Johnson teamed for eight and seven points respectively.

The `Canes’ pressure filled defense limited Wright to 5-of-14 shooting in the first 20 minutes and held the entire Cavalier offense to a 34.3 shooting percentage.

Last season in Charlottesville, Va., the Cavaliers were also ranked No. 21 and defeated Miami 84-75 in overtime.

Clark, playing in the 100th game of her career, fought off flu-like symptoms and scored 12 points for the Hurricanes – the most since scoring 14 at Maryland on Jan. 21.

Miami returns to the hardwood this Sunday, when it faces the NC State Wolfpack at 5:30 p.m. in Raleigh, N.C. The game will be televised nationally on ESPN2. The contest, labeled Hoops 4 Hope will raise breast cancer awareness as the players and coaches will all being wearing pink socks and shoes to support the cause.

The Hurricanes return to the BankUnited Center to face the Georgia Tech Yellow Jackets on Sunday, Jan. 21 at 3 p.m.