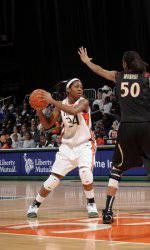 Hurricanes to Battle No. 21 Virginia in Key ACC Matchup

CORAL GABLES – The University of Miami women’s basketball team will face the 21st-ranked Virginia Cavaliers in a pivotal ACC meeting at the BankUnited Center on Thursday, Feb. 11 at 7 p.m.

Miami has won two straight games – both at home coming into Thursday’s contest. In their last game, against SIU Edwardsville, the Hurricanes saw five players score in double-figures – led by Shenise Johnson’s 16. The Henrietta, N.Y. native fell just a rebound shy of her seventh double-double of the season. However, with 13 points and 10 rebounds, freshman Morgan Stroman recorded her third double-double of the year.

Riquna Williams added 12 points with a career-high seven steals in the 85-60 win, while Diane Barnes and Sylvia Bullock scored 11 points apiece. Bullock’s total was a career-high and both her and Barnes were a perfect 5-of-5 from the field in the contest.

A Look at the Cavaliers

Virginia heads into Thursday’s key ACC matchup having won six of its last seven contests, including its last two over Clemson and Maryland.

The Cavaliers are led by the ACC’s leading scorer Monica Wright who is averaging 22.7 points and 6.4 rebounds per game. Chelsea Shine and Whitny Edwards score 8.2 and 7.7 points per game respectively. Wright also leads the team with 71 assists on the season.

The Hurricanes are just 1-6 all-time against Virginia, with its lone win coming in Charlottesville in 2005. Last season, Miami fell in overtime to the No. 21 ranked Cavaliers, 84-75. In that game, Shenise Johnson nearly recorded a triple-double scoring 25 points, while adding a career-best 10 assists and grabbing nine rebounds.