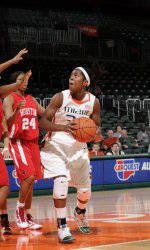 CORAL GABLES – The University of Miami women’s basketball team (16-7) shook off early-game rust and pulled away from the overmatched SIU Edwardsville Cougars (6-19), 85-60 on Super Sunday at the BankUnited Center.

Freshman Morgan Stroman recorded her third double-double of the season with her 13 points and 10 rebounds. The Hopkins, S.C. native hit 7-of- 8 free throws in her second consecutive start.

Coming off the bench, sophomore Sylvia Bullock scored a career-high 11 points while adding three rebounds. Riquna Williams hit two threes on the day, scoring 12 points in all, while recording a game and career-high seven steals.

Senior Diane Barnes who is one of three `Canes that average double-figure scoring on the season, put in 11 points – going a perfect 5-of-5 from the field. The Lakeland, Fla. native also had her hand in on three steals.

The Hurricanes dominated the paint, outscoring the Cougars 44-14. The `Canes also showed their up-tempo style of play, scoring 20 fast-break points while SIUE only had five.

Miami also had 21 assists, the most since dishing out 21 in a win over Quinnipiac on Dec. 28.

At the half, Miami held a 45-34 lead and both Johnson and Stroman had 10 points to lead their team. Johnson also had a team-high five rebounds while Stefanie Yderstrom had five assists.

Also in the opening half, the Hurricanes converted on three separate and-one scenarios – two by Johnson and one from Stroman.

The Hurricanes face the Virginia Cavaliers in the final game of a three-game homestand on Thursday, Feb. 11. Tip-off is scheduled for 7 p.m. at the BankUnited Center.