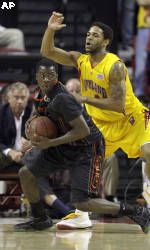 COLLEGE PARK, Md. (AP)–Greivis Vasquez and Landon Milbourne each scored 16 points, and Maryland pounced on Miami at the outset Tuesday night in an 81-59 win that gave the Terrapins sole possession of first place in the Atlantic Coast Conference.

Maryland (14-5, 4-1) scored the game’s first six points, increased the margin to 21 just before halftime and cruised to its fourth straight win. Eric Hayes and Sean Mosley had 10 points apiece, and Vasquez finished with nine assists.

The victory pushed the surprising Terrapins a half-game ahead of Virginia in the ACC.

Combined with an 88-64 win over North Carolina State on Saturday, Maryland has recorded successive 20-point victories in the conference for the first time since February 2003.

Senior James Dews added 11 points for the Hurricanes, while Dwayne Collins finished with a game-high 10 rebounds. For Collins, tonight marked his eighth double-digit rebounding effort of the season, and the second in as many games.