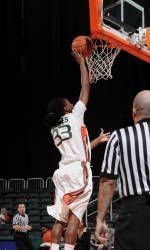 CORAL GABLES – The University of Miami women’s basketball team will head to Atlanta to take on the No. 25 Georgia Tech Yellow Jackets in the first of two meetings this season. Game time is set for 7 p.m. on Wednesday, Jan. 27 at the Alexander Memorial Coliseum.

Miami has played well on the road this season, holding a 7-1 record so far on the year – the best road record since the 1991-92 season. One of those road wins, snapped Maryland’s 48-game home win streak on Jan. 21. However, Miami comes into this game after suffering a 73-69 loss to the Virginia Tech Hokies at the BankUnited Center this past Sunday.

In the loss Shenise Johnson continued her superb play, scoring a team-high 18 points, grabbing seven rebounds and having her hand in on a game-high seven steals. Riquna Williams scored 15 points, and senior Diane Barnes scored 14. Williams and Johnson are second and third in the conference in scoring at 20.9 and 18.0 points per game respectively. Barnes is second in the ACC in rebounding, grabbing 8.7 boards per contest.

A Look at the Yellow Jackets

Georgia Tech holds a 2-3 record inside conference play wins over Clemson and Wake Forest. However, it has lost two straight to Boston College and Virginia – both games were away from the Alexander Memorial Coliseum.

The Yellow Jackets are led by Brigitte Ardossi who is averaging 14.2 points and 6.9 rebounds per game. Alex Montgomery and Deja Foster score 11.7 and 9.8 points per game respectively. Foster leads the team with 74 assists on the season.

This will be the 17th meeting between the two programs with Georgia Tech holding a slight 9-7 overall lead in the all-time series.  Last season, the teams met twice with the Yellow Jackets coming out on top on both occasions. Each year from 2006 through 2008, the programs met three times – twice in the regular season and once in the first round of the ACC Tournament.