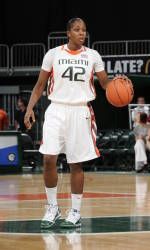 CORAL GABLES – Riquna Williams scored 27 points to lead Miami to a 78-70 victory over No. 11/13Florida State in their Atlantic Coast Conference opener Sunday at the BankUnited Center.

The Hurricanes (13-2) withstood a late Florida State rally for their first win over a top-15 team since beating No. 10 Purdue on Dec. 19, 1991. The win also snapped an eight-game losing streak against the Seminoles.

Miami went on a 14-2 run midway through the second half, taking a 55-41 lead on Shenise Johnson’s basket with 10:17 left. Stefanie Yderstrom’s three-pointer with 9:55 remaining gave Miami its biggest lead, 58-43.

But the Seminoles went on a 13-2 run and Angel Gray’s two free throws with 4:20 remaining cut Miami’s lead to 62-58 before the Hurricanes countered with eight unanswered points. Alysha Harvin scored 16 points for Florida State (14-3).

Coming into the game, senior Diane Barnes was the ACC’s second leading rebounder – averaging 9.7 per game. Against the much bigger Seminoles, the 6-2 Lakeland, Fla. native grabbed 13 boards, one shy of her career-best.

Shenise Johnson scored below her average on the afternoon, but she did score in double-figures with 10 points – the only Miami player to score in double-digits in every game this season. Johnson – the conference’s most recent player of the week, dished out a game-high tying five assists and led all players with four steals.

Freshman Morgan Stroman had her fifth double-figure scoring effort of the season as she poured in 14, six from the free-throw line.  The Hopkins, S.C. native grabbed five rebounds for the ‘Canes, all on the offensive glass.

Charmaine Clark hit a pair of threes in the first half on consecutive possessions and immediately after hitting a pair of free-throws in the second half, she stole an outlet pass and scored an easy layup to give Miami its first lead of the second half. The senior captain finished with 12 points, the most since a win over Bethune-Cookman in November.

Williams led all scorers at the break with 14 points. Early on, she forced FSU to take a 30-second timeout at just two minutes into the game after the Pahokee, Fla. native drained back-to-back three pointers, giving Miami an 8-2 lead.

The Seminoles grabbed a four point lead – their largest of the first half – with 44 seconds to go, on a Chelsea Davis free throw.  After Morgan Stroman sank a pair of foul shots, Williams stripped FSU’s Alysha Harvin at mid-court and raced down the court for the game-tying layup with 27 seconds left. The teams headed into the locker rooms knotted at 30.

The Hurricanes continue their ACC schedule when they welcome the No. 9 Duke Blue Devils to the BankUnited Center at 7 p.m. on Thursday, Jan. 14.