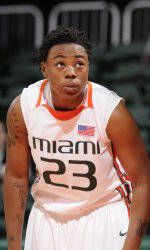 OXFORD, Ohio – The University of Miami women’s basketball team – led by Shenise Johnson and Diane Barnes, moved to 12-2 on the season with a 75-61 win over the Miami University RedHawks (2-11) at Millett Hall.

Johnson scored a career-high 29 points, grabbed nine rebounds, had six assists and six steals in one of her best games of the season. The sophomore was 10-of-13 from the free-throw line and teamed with Barnes, was able to help the `Canes overcome poor starts in each half.

Barnes was dominate off the bench as she scored 14 points and pulled down nine rebounds of her own. The senior from Lakeland, Fla. also contributed with three assists, three steals and a team-high two blocks.

After Miami (Ohio) opened the second half on an 11-0 run to cut UM’s lead to four, Johnson found Barnes on a perfectly executed lob and layup with 13:07 remaining. After that, momentum shifted back to the `Canes as they built themselves a lead that reached as high as 21 points.

Another player coming off the bench that provided a spark, was the Chesapeake, Va. native, freshman Shanel Williams. She may have only scored four points, but her five steals helped put an end to RedHawk runs in both the first and second halves.

The RedHawks jumped to a 12-5 lead in the game’s opening minutes, but after the first media timeout the Hurricanes got back on track and took their first lead on a Barnes layup with 8:27 remaining in the half at 17-16. From that point, the `Canes closed the half on 24-10 run, behind 18 points from Johnson and led 41-26 at the break.

The Hurricanes forced 28 turnovers, 18 coming off of steals – leading to 27 points.

Miami opens its ACC schedule on Jan. 10 when it plays host to No. 11 Florida State at 1 p.m. at the BankUnited Center. The game is to be televised on Fox Sports Florida.