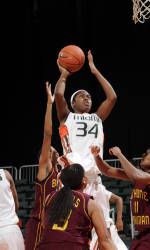 CORAL GABLES – The University of Miami women’s basketball team will play the second of a two-game swing in Upstate New York when it faces the Cornell Big Red at the Newman Arena on Monday, Dec. 21 at 7 p.m.

After a two-week layoff, Miami won its return to the hardwood with a 68-52 win at Binghamton. Despite playing without senior starters Diane Barnes and Charmaine Clark, the Hurricanes jumped on the Bearcats behind 24 first-half points from Riquna Williams. Binghamton was held to only 23 points in the opening frame.

Shenise Johnson also had a big game as she scored 20 points and grabbed a game-high 20 rebounds for her four double-double of the season. Joining Johnson with double-digit rebounds was Sylvia Bullock with 11 and Morgan Stroman with 10.

In all, Williams scored 28 points – the fifth time this season that the Pahokee, Fla. native has scored 28 or more points on the season. She currently leads the ACC with 24.1 points scored per game and ranks sixth nationally.

A Look at the Big Red

Cornell has won two straight games heading into Monday’s contest – 74-64 over Colgate and most recently 71-67 over Manhattan on Saturday afternoon.

In their only previous meeting a season ago, the Hurricanes came away with a 61-47 victory at the BankUnited Center. Riquna Williams led all scorers with 18 points while Shenise Johnson added nine.