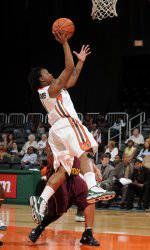 `Canes Too Much For Binghamton

BINGHAMTON, N.Y. – The University of Miami women’s basketball team improved to 8-1 on the season with a 68-52 win over the Binghamton Bearcats (2-7), Saturday afternoon at the Events Center.

Sophomore Riquna Williams scored 28 points in the contest and had 24 in the opening half – out-pacing the entire Binghamton team which had only 23 first-half points. The Pahokee, Fla. native hit four threes on the day and added a game-high six steals.

The Bearcats had no answer for Miami on either end of the court in the first half even though the Hurricanes played without two starters. Charmaine Clark is day-to-day with a leg injury and Diane Barnes was serving a suspension.

Sheninse Johnson scored 20 points in a homecoming of sorts – she hails from Rochester, N.Y. and was greeted with a large contingent of fans who made the three-hour drive. Johnson scored 10 points in each half and grabbed seven rebounds.

Freshmen Morgan Stroman and Stefanie Yderstrom both started for the first time in their collegiate careers and Stroman grabbed a game-high 10 rebounds and scored six points. Yderstrom added seven points of her own, hitting two of UM’s seven three-pointers.

As they have in each of their games this season, the Hurricanes held the advantage on the glass, 41-28. Nine of those rebounds came from Sylvia Bullock who also added five points. Johnson finished just two rebounds shy of her fourth double-double of the season.

Erica Carter led the Bearcats with 17 points and Viive Rebane added 11 for the home team.

The `Canes remain in Upstate New York as they will face Cornell in Ithaca, Monday evening at 7 p.m.

Miami returns to the BankUnited Center on Monday, Dec. 28 as it faces Quinnipiac in the first round of the Wyndham Miami Holiday Tournament at 5 p.m. The 17th-ranked Texas Longhorn will open the tournament against Central Michigan at 3 p.m.