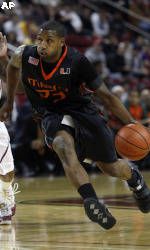 BOSTON (AP) -Reggie Jackson grabbed the rebound on Malcolm Grant’s missed 3-pointer with 3 seconds left, then sank a pair of free throws that proved to be the difference as Boston College beat Miami 61-60 in the Atlantic Coast Conference opener on Sunday.

Jackson scored 18 with nine rebounds and Corey Raji had 17 points and nine boards for the Eagles (6-2) to send Miami (8-1) to its first loss. BC outrebounded the Hurricanes 46-21, including a 23-4 edge on offensive rebounds.

Later, Grant went for the win with a 3-pointer, but Jackson came down with the rebound. He was immediately fouled and hit both free throws for a 61-57 lead.

Grant hit a 3-pointer at the buzzer for the final margin.