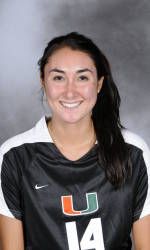 This is the seventh consecutive season that Miami has received the award. Tricia Taliaferro has been at the helm of each of the award-winning teams. To qualify for the honor, the NSCAA requires that the team GPA be at 3.0 or above.

Earlier this season, Brittney Macdonald (3.92 GPA) and Brittney Steinbruch (3.68 GPA) earned second-team selections to the ESPN The Magazine Academic All-District Team. Sophomore Ashlee Burt was named to the third team, carrying a GPA of 3.85. Macdonald was honored by ESPN for the second straight season – the first Hurricane player to earn that distinction. Both Steinbruch and Burt were recognized for the first time.

The All-ACC Academic Team won’t be announced until February of 2010, but Miami was well represented last year as Macdonald, Steinbruch, Lauren Singer, Corynn Carino and Julianne Rickers all received nods.