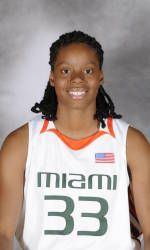 Hurricanes Continue to Roll in 88-46 win Over Bethune-Cookman

CORAL GABLES – The University of Miami women’s basketball team moved to 3-0 on the season as it opened its home schedule with an 88-46 victory over the Bethune-Cookman Wildcats at the BankUnited Center on Wednesday night.

Five players scored in double-figures on the evening, led by sophomore guard Riquna Williams who continues to rack up points – scoring 29 against the Wildcats. The Pahokee, Fla. native was recently named the ACC Player of the Week after she opened the season with a 34 point performance at UC Riverside, followed by a 30 point effort at Cal State Bakersfield.

Williams, who hit a school record eight three-pointers on Sunday, added three more in this game and now has 17 so far on the season – far and away more than any other Atlantic Coast Conference player.

Senior Diane Barnes grabbed a career-high 14 rebounds in the game and recorded her second double-double of the season as she also scored 12 points. Freshman Morgan Stroman, who was a 2009 McDonald’s All-American, picked up her first double-double in just her third collegiate game with 10 points and 10 rebounds. The Hopkins, S.C. native also had a game-high five steals to go along with four assists.

Miami’s other McDonald’s All-American, sophomore Shenise Johnson continues her impressive play as the `Canes floor general. She scored 16 points and dished out a season-high nine assists.

In her senior season, Charmaine Clark has shown how well-rounded she has become – she scored right at her average, with 15 points and dished out a career-high seven assists, while pulling down six boards.

In every game this season, Miami has shot 50 percent or better from the floor and it continued that streak Wednesday – shooting an impressive 52.4 percent. The team’s improved chemistry has led to extra passes for easy layups and it shows in the box score, as UM dominated the paint -outpacing Bethune-Cookman 42-18. The Wildcats turned the ball over 24 times, leading to 33 Miami points.

The Hurricanes didn’t have quite the start they did in their previous two games as they were only 3-of-10 from the field in the contest’s opening four minutes. However, the home team returned to form and built themselves a 40-19 halftime lead on 53 percent shooting.

Clark led all scorers at the break with 11 points, guaranteeing her double-figure scoring in each of the season’s first three games. Fellow senior Diane Barnes scored six points at the break but also had eight rebounds.

The 19 points allowed in the first half was the lowest since giving up the same amount to then No. 11 Florida State this past February. Miami’s defense held the visitors to a 26.1 field goal percentage, the `Canes best defensive effort since holding Fordham to 23.5 clip in a 57-40 win on Nov. 23, 2007.

The Hurricanes will head out on the road again as they face UAB of Conference USA, Saturday at 2 p.m. in Birmingham, Ala. Miami returns to the BankUnited Center on Tuesday, Nov. 24 to face Houston at 12 p.m. for UM’s annual Youth Day.