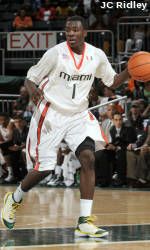 CORAL GABLES, Fla… University of Miami freshman guard Durand Scott has been selected ACC Rookie of the Week after a strong debut in the Hurricanes’ 83-53 season-opening victory over North Carolina Central.

In his first collegiate game on Saturday, Scott – a 6-3 freshman from New York City – handed out a game-high 10 assists with zero turnovers, and added four points and two steals. The 10 assists tie an ACC freshman record and are the most assists by a Miami player in exactly three years, since Anthony Harris finished with 10 assists versus Alcorn State on Nov. 14, 2006. In addition, Scott is just the second Hurricane in program history — and the first since Thomas Hocker accomplished the feat in 1990 — to record double-digit assists with no turnovers.

Wake Forest’s Al-Farouq Aminu was named ACC Player of the Week after the 6-9 sophomore forward averaged 24.0, 11.0 rebounds and 2.0 steals and shot 64 percent from the floor (16-for-25) in victories over Oral Roberts and East Carolina.