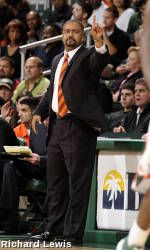 Brown, ranked among the top 15 shooting guards by both Rivals.com and Scout.com, averaged 15 points and five rebounds per game as a junior at Liberty County High School. The four-star recruit, ranked among the top 65 players in the entire 2010 class by both Scout and Rivals, was considered one of the top shooters on the AAU circuit over the summer. Brown was also recruited by schools such as Virginia, Alabama and Georgia.

“Rion is a tremendous young man,” said coach Haith. “He is a great shooter – a very athletic combo guard with great size. He has the opportunity to be a very special player for us.”

Brown will be the second Georgia native on the Hurricanes roster in 2010-11, joining current sophomore DeQuan Jones (Stone Mountain, Ga.). His father, Tico Brown, was a guard for Georgia Tech from 1977-79 and was a second-round pick by the Utah Jazz in the 1979 NBA Draft.

Akpejiori, who is originally from Nigeria, has spent the last two years in the United States and is currently attending Sunrise Christian Academy in Wichita, Kansas. He played in the international game during the 2008 Jordan Brand Basketball Classic in New York City, but sat out his junior season in 2008-09 after sustaining an injury.

“Raphael has great size and athleticism,” said Coach Haith. “He’s a shot blocker that can attack the basket. I love his toughness and his physicality, and he has the potential to be a really strong post presence in our league.”