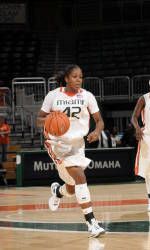 BAKERSFIELD, Calif. – The University of Miami women’s basketball team (2-0) put on an offensive display in a 111-93 win over the Cal State Bakersfield Roadrunners (0-2), at the Icardo Center on Sunday afternoon.

Sophomore Riquna Williams scored 30 points just two nights after netting a career-high 34 at UC Riverside. After clinging to a 50-49 half-time lead, Williams exploded in the first four minutes of the second half, as she hit five three pointers – as Miami pulled away for good. In all, Williams hit a career-high eight threes and has scored 30 or more points in back-to-back games.

Fellow sophomore Shenise Johnson recorded her first double-double of the season after posting 23 points and 12 rebounds. The Henrietta, N.Y. native also dished out seven assists in the victory, just three shy of a triple-double.

Senior Charmaine Clark scored 17 points and grabbed six rebounds – four on the offensive end. She was joined by freshman Morgan Stroman, who also scored 17 points. The 2009 McDonald’s All-American became the first Miami freshman of the season to score in double digits. The Hopkins, S.C. native also had a game-high five steals.

The 111 points scored in the game was just one point shy of the team-record 112 – scored against Stetson on Jan. 12 1991. The Hurricanes also dominated the glass, outrebounding the Roadrunners 58-36. More impressively, Miami grabbed a total of 24 offensive rebounds compared to CSUB’s 20 defensive boards. Miami scored 27 second-chance points and owned the paint, outscoring its opponent 58-34 from down low.

The `Canes have opened the season with two straight games of shooting better than 50 percent from the floor and are an outstanding 18-of-36 from three-point range.

Barnes, in her senior season, was big for Miami – grabbing a game-high five offensive rebounds and eight in all. After scoring 10 points against Riverside, sophomore Sylvia Bullock was close to a double-double of her own, scoring seven points and grabbing nine rebounds.

The Hurricanes couldn’t shake Bakersfield in the opening half, but eventually took the lead for good on Hannah Shaw jumper with 5:17 remaining in the period. Cal State’s Katie Williams hit a jumper in the paint with just two seconds remaining saw Miami head into the break with just a one point lead

The `Canes will face Bethune-Cookman in their home-opener on Wednesday, Nov. 18 at 7 p.m.