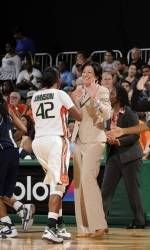 “As a staff we knew it was imperative that we continue our streak of nationally rated recruiting classes,” said Meier. “Many schools can `strike it rich’ once in awhile, but I think the recruiting efforts of my staff – year in and year out – are really starting to pay dividends for the University of Miami.”

“In this class, we went head to head with Final Four teams and traditional powers and came up on the positive side. Having McDonald’s All-Americans and Street and Smith All-Americans on our current roster -really helped sell the vision of where this program is heading, added Meier. “All four of these young ladies committed to us, in large part, because of the young talent currently on our team. This class is accustomed to winning and they could easily see the incredible foundation of talent we have at the `U’.”

McGuire, a 5-11 guard from Roosevelt High School, is ranked as the No. 7 overall player in the nation by Collegiate Girls Basketball Report and the fifth-best point guard by hoopgurlz.com. With elite quickness and ball handling, McGuire scored 13 points per game a season ago and was one of five players to be named to the Nike Nationals All-Tournament Team while playing for her North Tartan AAU squad.

“Ray Ray (Suriya) is a tremendous sign for us. In my opinion she was the most exciting open court player in the country this summer and after being named on the Nike Nationals All-Tournament Team, her stock went through the roof,” said Meier. “She is considered `the breakout player of the summer’ in her class and it is a credit to my staff for identifying her early – and a credit to Suriya and her mother Anjali for recognizing our early commitment to them and sticking with us. She is the type of player that will have a huge fan club in Coral Gables with her crowd-pleasing, seemingly effortless style of play.”

Led by McGuire, Roosevelt High is ranked No. 23 in the USA Today preseason national top 25.

“Suriya is a big-time guard… she is really athletic and will be a great point guard for Miami the next four years,” said Brett McCormick of AllStarGirlsReport.com.

Brown, a 6-1 forward from Ouchita Christian High School, is rated as the 28th best player at her position nationally by HoopGurlz.com. She averaged 13 points and nine rebounds per game as a junior, often facing double and triple-team defense. Brown received all-state recognition after her sophomore and junior seasons. During her career she has helped the Lady Lions achieve a No. 1 ranking in the state in class 5A.

“Maria is a great `get’ for our staff. She brings the toughness we have been seeking and the versatility that has become a trademark of Miami `swing’ players,” acknowledged Meier. “She is a fun-loving, positive person who plays with so much joy and passion. Her future is very bright and I cannot wait to see her bring her physical style of play to the ACC. She comes from a terrific high school program, and her coach, John Merritt, is one of the best in the game. Her basketball IQ – combined with her inside-out game – make her a tough match-up. We expect great things from her the minute she arrives on campus.”

Archer, a 6-4 center from East Ridge High School, ranked as high as No. 49 overall in the nation according to AllStarGirlsReport.com. The athletic post player scored18.7 points per game her junior season while shooting 60 percent from the field.

“Selina has been committed to our program for a few years now. We identified her early and with her family’s support, we were able to establish tremendous relationships throughout the recruiting process. She really turned heads this spring and almost all of the major schools took a fly at her,” Meier said. “It’s a testament to her character that she remained loyal and committed to bringing `THE U’ back to national prominence. Every great program needs an established low post presence – one who changes games on defense and gives you solid scoring on the block. Selina will truly elevate this program and her speed and athleticism fits perfectly into our style of play.”

Saunders, a 5-8 guard from South Florida’s own South Broward High School, averaged 17 points, five rebounds and 4.5 assists her junior season. She is currently ranked as the No. 40 guard in the nation and her shooting touch will add to the Hurricane scoring punch in the future.

“Krystal Saunders was a player we targeted early. She is one of the most mentally tough players I have ever seen. She possesses an incredible shooting touch and range and combines that with a defensive grit and stamina that inspires her teammates,” commented Meier. “We love the fact that she comes from the same high school (South Broward) and coaching staff that `raised’ all-time Miami great Tamara James (as well as Lamese James). She has been `coached hard’ and will be ready for the ACC on day one. She’s just another great scorer from South Florida that wanted to come here and make a huge impact on her home town team.”

“Krystal made up her mind that she wasn’t going to take anymore visits to other schools when she found out that Miami offered her a scholarship,” said South Broward head coach Rich Walker. “I believe in the University of Miami basketball program and really appreciate what they do in Miami.”

With this season’s No. 19 recruiting class, Miami has had a top 25 recruiting class for the second time in three seasons. The 2009 class was ranked No. 33 with the 2008 incomers ranked 21st.

Each of the last two classes have included a McDonald’s All-American, the first time in school history that it has happened in back-to-back classes. The 2008 class featured Shenise Johnson, who went on to be named to the ACC All-Freshman team – with the 2009 class highlighted by South Carolina native Morgan Stroman.

“Overall, the combination of two physical post players, a deep range shooter and a dynamic, attacking point guard makes this class perhaps the most complete class we have signed at Miami,” added Meier. “They meet our needs and elevate our program as we continue to work our way to national prominence.”

The Hurricanes open their 2009-10 season on Friday, Nov. 13, at UC Riverside followed by at contest at Cal State Bakersfield on Sunday, Nov. 15.