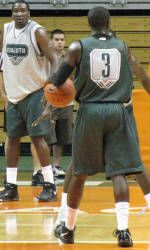 The Hurricanes – who went 19-13 last season, advancing to the second round of the NIT – opened their last two seasons versus the Division II Moccasins and will use Monday’s game as a final tune up before their 2009-10 season-opener at home on Saturday versus North Carolina Central at 4 p.m.

Miami looks to capitalize on a mixture of returning leadership and young talent. The Hurricanes return two of their top-three leading scorers from last year in Dwayne Collins and James Dews, as well as two of their top-three threats from behind the arc in Dews and Adrian Thomas. In addition to the returning veteran talent, sixth-year head coach Frank Haith and the Hurricanes welcome a recruiting class that ranked among the top 25 in the nation.

“We’re excited for another season,” said Coach Haith. “We’re young, but we also have some veterans and we’re excited about their improvement over the last season. We’re really excited about the newcomers and what they bring to the table. They young guys have really worked extremely hard in practice.”

Fans are also invited to join Coach Haith and the men’s team at the second annual University of Miami Men’s BasketBowl at Splitsville in South Miami 5701 Sunset Drive, Suite 202) on Tues., Nov. 10, from 6:30-9:30 p.m.

Tickets for guests are $75, while tickets for children 12 and under are $50. Admission includes food, beverage and a UM gift.

All proceeds from the event will go directly to the Miami men’s basketball program.