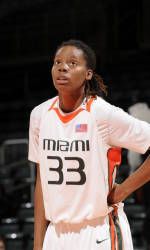 CORAL GABLES – The University of Miami women’s basketball team faced the cross-town Barry Buccaneers in an exhibition tilt Saturday night at the BankUnited Center. The Hurricanes proved to be too much for their Division II opponent, cruising to a 75-42 victory.

Johnson won a gold medal with the U19 U.S. National Team in Bangkok, Thailand over the summer and was a member of the ACC All-Freshman Team a season ago – when she led the Hurricanes in almost every statistical category. The Henrietta, N.Y. native picked up right where she left off as she also added six assists and four steals.

Barnes was all over the glass for Miami and was a beneficiary the Canes’ improved chemistry. The unselfish play of UM led to 21 assists for the team and the up-tempo style of play saw the home team hold a 14-2 edge in fast break points.

Williams was impressive and even earned a second-half start on her way to scoring five points and dishing out four assists. Stroman, a 2009 McDonald’s All-American, tied for the team lead with four steals and showed her athleticism with a couple offensive rebounds and putbacks. Shaw and Stroman each scored six points in their debuts. Shaw added two blocks on the night, matching Johnson and Riquna Williams.

For the game, the `Canes forced 30 Barry turnovers and owned the paint, scoring 48 points from up close.

The Buccaneers’ Mariesa Greene recorded a double-double of her own with 12 points and 12 rebounds. Green also recorded a game-high four blocks and Yvonne Houston had her hand in on four steals.

Miami wasted little time in showcasing its new-look offense, jumping out to a 16-3 lead in the game’s first eight minutes. Johnson and R. Williams each had a steal and a layup on back-to-back plays during the opening run.

The Canes’ defense forced 21 first-half turnovers – with 14 steals, resulting in 24 points. Johnson led all scorers with 11 first-half points and also had eight rebounds. Miami went into the break with a 39-13 lead.

Last season, the Hurricanes hosted Barry in a preseason exhibition at the BankUnited Center, narrowly escaping with a 52-49 victory.

Miami will open its 2009-10 regular season schedule with a two-game road swing on the West Coast – against UC Riverside on Friday, No. 13, then at Cal State Bakersfield on Sunday, Nov. 15. The Canes’ home opener will be Wednesday, Nov. 18 against in-state opponent Bethune-Cookman.