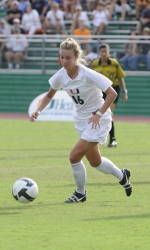 All six seniors saw the Hurricanes advance to the NCAA Tournament in both 2007 and 2008, the first time in program history that Miami made consecutive tournaments.

“It’s been an amazing journey that we have been through over the last four years,” said head coach Tricia Taliferro. “It ultimately started with this group. It was a very emotional moment for us.”

The Hurricanes fired 23 shots – to only seven for NC State – and forced a total of nine corner kicks. However, even with nine shots on goal, Miami could only score once.

That goal was the first of the season for Lauren Singer, coming in the 67th minute. Ricks-Chambers’ effort down the left sideline beat the Wolfpack defender, she then lofted a ball to the middle of the field that Singer one-timed into the right of the net from 15 yards out.

Unfortunately for Miami, its celebration was short lived as NC State answered only 37 seconds later. Kristina Argiroff fired a shot from 30 yards out near the right sideline that found its way into the top left corner of the net.

Singer had another opportunity to score the game-winner in the first overtime period, when she settled the ball at the top of the box. Her shot was only inches too high as NC State eventually escaped with a tie.

Miami will have only three days to prepare for the defending National Champion North Carolina Tar Heels. The Hurricanes host the nation’s No. 2 ranked team Sunday, Oct. 25 at Cobb Stadium with kickoff scheduled for 1 p.m.