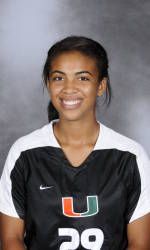 `Canes Close Out Road Trip with Loss to No. 6 Wake Forest

The Hurricanes played evenly with one of the nation’s top teams in the opening half, holding Wake Forest scoreless. The Miami defense limited the Demon Deacons to only three shots in the opening frame with none on goal.

However, in the second half, Wake Forest needed only one minute to score as Bess Harrington collected a rebound, three yards out and gave the home team the game winner. Six minutes later, the Demon Deacons’ Jackie Logue scored her first of the season on a header off a corner kick.

The Hurricanes only managed two shots on goal for the contest, both coming off the foot of freshman Jordan Roseboro. In all, Miami collected nine shots to 10 for the Demon Deacons.

Beginning Thursday, Oct. 22, Miami will host their final two home matches of the season, with NC State visiting South Florida for a 7:30 kickoff on senior night. On Sunday, Oct. 24, the Hurricanes play host to the No. 2 and defending National Champion North Carolina Tar Heels.