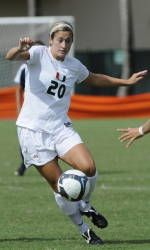 The Hurricanes return to Cobb Stadium after falling to Florida State on the road, 4-1, this past Sunday.  In the defeat, Julianne Rickers scored her second goal of the season, right before the half.

So far on the season, freshman Kate Howarth and junior Brittney Steinbruch lead Miami with six points apiece and Howarth has a team-leading three goals.  Junior Barbara Blocker also has added two goals on the year.

In goal for Miami, has been sophomore Vikki Alonzo.  The Carrollton, Texas native broke the UM record for career shutouts (15) in the last ‘Cane victory, a 2-0 defeat of No. 9 Maryland in their last home match.  Also in that win, head coach Tricia Taliaferro won her 100th career match over her alma mater.

A Look at the Tigers
Clemson most recently fell to a ninth-ranked Wake Forest team, 3-0 at home.  Freshman Maddy Elder leads the Tigers in scoring with nine goals and an assist for a total of 19 points, ranking third in the ACC.  Lily Boleyn and Tara Cort have four points apiece for Clemson, tied for second on the team.

Goalkeeper Paula Pritzen has recorded 45 saves so far in her junior season.

The Series
Friday’s meeting will be the sixth between the two programs – dating back to 2004 season. The series is tied at 2-2-1. Last season in Clemson, the Hurricanes won on a 1-0 on a Rickers goal in double-overtime.

October is Breast Cancer Awareness month and the Hurricanes soccer team is doing their part to raise awareness by holding a `Pink’ game to raise money to support the cause. The Hurricanes will wear special pink Nike jerseys during Friday’s game against Clemson

Admission to the game will be free, but fans are encouraged to make a donation at the gate as 100 percent of all funds raised will benefit the Sylvester Cancer Center.  Pink Hurricane t-shirts will also be available for purchase for $10 at Cobb Stadium, while supplies last.

Fans can also go online at hurricanesports.com to bid on the pink jerseys that will be worn during Friday’s game. The auction runs until 7 p.m. on Monday, Oct. 12.