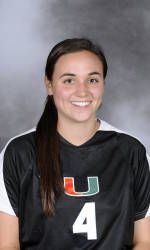 CORAL GABLES – The University of Miami women’s soccer team (4-2-0) defeated the No. 22 University of Washington Huskies (3-2-0) in the opening day of the Portland Nike Invitational, 1-0 on Ashlee Burt’s late second-half goal Friday evening.

The Hurricane sophomore recovered a rebound on a shot by Brittney Steinbruch at the top of the 18-yard box and buried it into the bottom right corner in the 83rd minute. The goal was the first on the season for Burt and is the sophomores third of her career.

“I really got lucky. Brittney did all the hard work for me,” said Burt. “The ball came to me and I was able to score”

With a season-high nine saves, sophomore Vikki Alonzo recorded the third shutout of the season for Miami. Alonzo now has a total of 13 shutouts in her short career, but is tied with Rachel Elsby for second place in the UM record books, only one back from matching Lauren McAdam in the top spot.

“Washington was very good, very organized and is very dangerous on the attack,” said head coach Tricia Taliaferro. “This is a big step for us, traveling cross-country and being able to gut it out and get a result.”

Steinbruch led Miami with three shots on the night and picked up her second assist of the season.

Next up for the `Canes, is the No. 1 ranked team in the nation, the host Portland Pilots. The Pilots entered the Portland Nike Invitational with an unblemished 5-0-0 record and are scheduled to face Illinois late Friday night.

“Portland obviously is not going to take us lightly,” said Alonzo on the prospect of facing the nation’s top-ranked team. “We need to go out hard like we did tonight and play our game.”