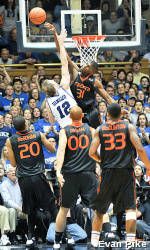 At least 10 of those games will be broadcast nationally, including home contests versus Duke (Feb. 17, ESPN) and Florida State (March 6, ESPN2), and a road game at Wake Forest (Feb. 2, ESPN).

This season’s 16-game ACC slate includes 10 games versus 2009 NCAA Tournament participants – including facing defending national champions North Carolina on the road, nine games versus teams that finished in the top half of the ACC standings in 2009 and home and away series with Wake Forest, Florida State, Boston College, Virginia Tech and Virginia.

“Competing in the best conference in America guarantees that you will have both an exciting and challenging schedule,” said sixth-year head Miami coach Frank Haith, who has guided the Hurricanes to four postseason appearances in five years at the helm. “Our schedule is very competitive and will be a test for our team which has a young core. Our staff is excited and optimistic about the talent we have assembled, and we are looking forward to getting back on the court and continuing to build this Miami basketball program.”

Sixteen of Miami’s 30 regular-season contests will be at home at the BankUnited Center, including eight games versus conference opponents. UM’s home lineup is highlighted by a nationally-televised Big Ten/ACC Challenge showdown versus Minnesota on Wed., Dec. 2, its ACC home opener against Wake Forest on Sat., Jan. 9, and a home contest versus Duke on Wed., Feb. 17. Miami posted a 27-point victory over the then-No. 6/7 Demon Deacons last season, marking its largest margin of victory over both a ranked opponent and an ACC program, while the Hurricanes also knocked off the then-No. 4/5 Blue Devils in their last meeting in Coral Gables on Feb. 20, 2008.

The Hurricanes finished 19-13 overall last season and 7-9 in the ACC to tie for seventh place, advancing to the second round of the National Invitation Tournament. Miami returns two of its top-three leading scorers, as well as a pair of starters, including senior forward Dwayne Collins – the team’s top rebounder and second-leading scorer one season ago.

In addition, Miami welcomes its top-25 signing class of Antoine Allen and ESPNU 100 picks Durand Scott, Garrius Adams and Donnavan Kirk to the Hurricane family, while sophomore point guard Malcolm Grant – a transfer from Villanova – and redshirt freshman center Reggie Johnson look to see their first action on the hardwood for UM.

That action begins with an exhibition contest versus Florida Southern on Mon., Nov. 9, followed by the home opener versus North Carolina Central on Sat., Nov. 14 – the first of four regular-season home games for the Hurricanes in November. In the midst of that stretch, the Hurricanes will hit the road for the Charleston Classic from Nov. 19-22, which features four postseason teams – including NIT champion Penn State, SEC East leader South Carolina and perennial Southern Conference leader Davidson. Miami opens the tourney versus Tulane on Thurs., Nov. 19 and could potentially match up versus Penn State in the second round on Fri., Nov. 20 – which would pit UM against both the 2009 NIT and NCAA champions during the regular season.

Miami opens December with back-to-back nationally-televised contests, playing host to Tubby Smith’s Minnesota squad in a Big Ten/ACC Challenge contest on Wed., Dec. 2 in the first match up between the programs, before heading north for an early ACC contest. The Hurricanes will face Boston College in the nationally-televised conference opener on Sun., Dec. 6, as part of FSN’s ACC Sunday Night Hoops coverage. Miami has won three straight over the Eagles, including a 77-71 victory over the then-No. 17/24 Eagles in Chestnut Hill last season.

The Hurricanes return to Coral Gables for half of their remaining non-conference slate, while leaving the friendly confines of the BankUnited Center for a neutral-site contest versus Florida Atlantic in the MetroPCS Orange Bowl Basketball Classic on Sat., Dec. 19 at the BankAtlantic Center, in addition to an in-state trip to Stetson on Dec. 16 and a west coast swing to Pepperdine to open the New Year and close non-conference competition on Jan. 3.

UM opens the heart of its conference slate with its Jan. 9 ACC home opener versus Wake Forest. The Hurricanes then pack their bags for five of their next seven games, with back-to-back road contests at Virginia Tech (Wed., Jan. 13) and Virginia (Sat., Jan. 16) – who Miami has won three straight over. The Hurricanes then return home for their third game in less than a week to close the series with Boston College on Tues., Jan, 19.

Miami heads north to face Maryland – a program the Hurricanes have defeated six times in eight meetings since joining the ACC – on Tues., Jan. 26, before returning to sunny South Florida to close its first month of conference play versus Virginia Tech on Sun., Jan. 31.

UM opens February with its last back-to-back road contests, heading to Wake Forest, a team that lost just once in 15 home games in 2008-09, on Tues., Feb. 2, before heading to Tallahassee to take on Florida State on Sat., Feb. 6, in the first of two meetings for the teams in 2010.

In a favorable swing to the schedule, the Hurricanes will play five of their final seven ACC games at home during the last month of regular-season competition. Miami opens the stretch at home versus Georgia Tech – a team UM has defeated in their last two meetings in Coral Gables – on Wed., Feb. 10, before hitting the road for the last time in February to take on Clemson on Sat., Feb. 13.

ESPN will carry Miami’s showdown versus Duke on Wed., Feb. 17, which kick starts a three-game homestand for the Hurricanes, followed by games versus Virginia on Tues., Feb. 23 and NC State on Sat., Feb. 27.

The Hurricanes open March at North Carolina on Tues., Mar. 2, before returning home to the BankUnited Center for its 2009-10 regular-season finale versus Florida State on Sat., Mar. 6.

The ACC Tournament is slated for March 11-14 at the Greensboro Coliseum in Greensboro, N.C.

Tickets are now available through the Hurricane Ticket Office at 1-800-GO-CANES or visit us online at hurricanesports.com.